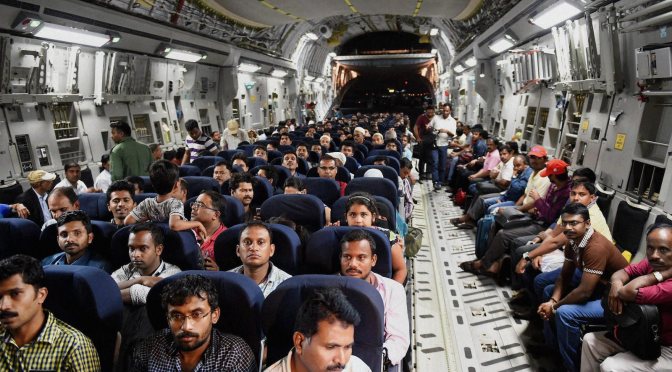 One particular thing I like about documentaries and movies based on true events is how they make me really curious about the subject. Airlift was a recent Bollywood movie on the World’s Largest Civilian Evacuation Undertaking in History by India in Kuwait in 1990. There are very few Bollywood movies that actually dwell on subjects such as these. In fact, serious fictional movies with deep plots and stories are virtually non-existent in this commercially driven industry. That’s why Airlift got me curious.

The movie was not bad. But the fact that the movie oversimplifies this hugely complex operation into a one-man mission leaves glaring holes to the actual story.

Of course, this is not a full-fledged documentary per se, but Airlift still manages to capture the basic tension of the 1991 Kuwaiti Crisis. Based on true events, Airlift managed a well-timed release. On the eve of the 67th Republic Day, the movie does a marvelous job fuelling our patriotic side. I don’t think India was never this high on desh-bhakti on the eve of Republic Day in recent memory.

Now about the ‘true’ part. Airlift was based on true events, but all characters featured in the movie were fictional. So I would love it if people would stop confusing Mr. Ranjit Katyal for a real-life hero. Yes, he is as fictional as Mickey Mouse. Of course, all this confusion can be attributed to all the false PR interviews done by all those involved in the movie. Take the example of the lead, Akshay Kumar in his recent Filmfare interview on the movie:

Your role is based on the life of Ranjit Katyal, who is a businessman in Kuwait. Could you tell us more about that?

That’s true but I cannot talk about him. He’s still alive and a big businessman today, living in Kuwait. But I didn’t meet him. Raja Menon (director) met him and spoke to him over the phone. But my character isn’t completely based on one person. There were three or four people like him, who were involved in the operation. We’ve combined all their stories for the character but Ranjit Katyal was the main guy. We’ve changed his name in the film. I should bring to your notice that in 1990, he was a multimillionaire but he lost everything, got everybody back to India from Kuwait and today, he’s a multimillionaire again. He’s earned back all his money.

Its things like these that get to my head.

So what really happened?

Airlift has heavily dramatized the story, giving very little credit to the other heroes responsible for this massive feat. Each and every individual responsible for this incredible achievement deserves equal mention. On that light, the Indian Government and Air India were given far less credit that what they actually deserve. And in the movie they were showed to be reluctant to even perform their duties and help the refugees whereas in reality, they were the ones mainly responsible for this whole operation. People highlighted in the film definitely deserve praise but it should be noted that they were only helping hands compared to the real heroes. There are several details incorrectly described in the movie. The movie does openly state that it is based on true events and that the characters depicted in the movie are completely fictitious. But that does not mean that the truth has to be obscured for that matter.

A. In the beginning, the narrative describes the ailing situation between the countries of Iraq and Kuwait. It was said that Iraq had requested the neighbouring countries to reduce their oil production to increase demand, whereas enabling Iraq to generate more profit in the international oil market and clear their debt. This is both incomplete and wrong. The main factors responsible for the Iraqi invasion of Kuwait were as follows:

B. And as mentioned earlier, the movie completely downsides the role of the Indian Embassy and Ministry of External Affairs, whereas it was them, not the local businessmen, who were mainly responsible for the successful operation. It’s alright to bring some fictional elements here but it is completely wrong to erroneously depict people responsible for the achievement.

Ranjit Katiyal is a fictional character.
Yes, to all your surprise, there was not one person behind this massive evacuation. The real evacuation(airlift) was carried out between Amman, capital of Jordan and Delhi. It was all possible because of heroics of our Ministry of External Affairs.
The MEA officials posted in Kuwait that time, the journalists and the people of Air India deny any Ranjit Katiyal during the whole operation.
As per Ministry of External Affairs, Indian Embassy was behind this operation.
Below are the accounts of four persons related with the evacuation that strengthen my postulation:
Rationally speaking, any one person who showed such an act of bravery can’t go unnoticed. Akshay Kumar, however, has been seen telling in media umpteen number of times about the research done before conceptualizing the film but as we can see, most of the people who were actually related some or the other way with this evacuation, deny knowing any Ranjit Katiyal, it is highly probable that a fictional story has been woven around a real life incident and film’s cast and crew are trying to sensationalize the issue to gain attention, publicity and viewers. Sounds similar to what was done during release of Ek Tha Tiger, isn’t it?
(Sources: 1. http://www.associationdiplomats….
2. The Berlin airlift was remarkable, but the largest civilian evacuation in history is by India
3. रहस्यमयी आदमी ने बचाए 1.7 लाख भारतीय? – BBC हिंदी )

I was deputed by the Government of Kerala to assist in evacuation of Kuwait along with Shri. Anand Kumar, now Additional Secretary in Ministry of Road Transport and Highways. We were at the border for 45 days along with officials from MEA. The entire operation was managed by the Ministry of External Affairs and Air India. Some amount of mobilisation had been done by a few businessmen in Kuwait who collected money to transport Indians from Kuwait to the Iraqi. Many evacuees told us that they had paid money. What the evacuees were not informed is that the no man’s land between Iraq and Jordan is 60 kms of desert. I do not know if Ranjit Katyal was one of the businessmen involved. We heard many other names. But never this one.
If credit is to be handed out top of the list should Shri. K.P. Fabien, Special Secretary in charge of Middle East. Shri. Gajendra Singh and his small team held up the operations at Amman embassy. Mr. Ratten Sehgal, then Additional Director in RAW also joined the team.
Things were limping along in the initial days as the Delhi did not appreciate the magnitude of the problem. The day we landed in the desert camp (on 26th August, if I remember right) more than 16,000 Indians had been living in makeshift shelters without food and water. Anand, Mr. Kapoor from the Amman Embassy and me were the first Indian officials they had seen. We were taken in captivity and the border police had to use use to rescue us. But inspite of urgent pleas by Embassy very little improved.
The game changer was a visit by Shri K.P. Unnikrishan who was a minister in the union cabinet, accompanied by Shri. Fabien, Shri. G.K. Pillai then Joint Secretary and later Secretary Home Ministry and Shri. Churchill Almayo, then Tourism Minister in Goa. Shri. Unnikrishan was booed, pelted with rotten eggs and raw tomatoes by the Indians at the desert camp. He reached the Embassy badly shaken. Sitting there he spoke to the PM, other ministers to make the arrangements and even to Shri. Chauhan of the Thums Up to airlift the needed Bisleri bottles. The situation changed from there I was a witness to the conversation.
From here the credit goes to Air India. They mobilised the Airbus 320s which had been lying idle after a crash at Bangalore.Drafting officials from the closed down Kuwait office and other middle eastern airports they set up an efficient operation in Amman. At a time we had 12 aircrafts landing in Queen Alia airport, Amman. The camp in the desert was emptied in no time and demolished. We, who had been embarassed at the barbs of the Jordan police, Pakistani and Egyptian officials could hold our heads up again.
Since then many have been claiming credit for an operation that involved so many Indians at all levels working together. Ranjit Katyal might emerge as the most successful of them.

C. The Indian people were never completely ignored by the Indian Government as shown in the movie. As 75% of the refugees hailed from Kerala, the Government of Kerala had a significant role in pushing for the efforts to evacuate the Indians in Kuwait. [9]

D. It would have been better if Air India’s involvement was shown to a greater extent. Not only were the people keen on helping in the operation as otherwise shown in the movie, the airline officials worked under some pretty tight conditions to complete the mission. [10]

But after the incident at Kuwait, India had a very poor response to the Iraqi Invasion. Of course, we were allies then, but the Invasion of Kuwait was completely on them. Even Pakistan was more concerned than us!

Then there was the controversy about the then Foreign Minister, IK Gujral cordially hugging Saddam Hussain on his first visit right after the Kuwaiti invasion. All these go to show how gutless the Indian government really was. [10]

Despite all that, this feat is a great achievement for India and her people. To move forward with such a huge population is not an easy feat. India is doing much better than many other countries but is still far behind several others. But of course, not everyone has over a billion mouths to feed.

As my cousin said,

13 thoughts on “The real story behind Airlift”